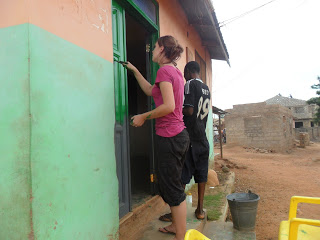 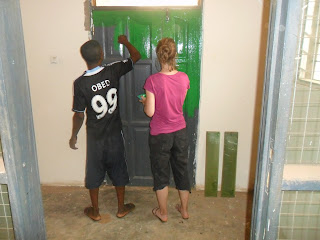 Today, TANF has some very exciting news. The ongoing help TANF has been giving to the community nurses has been able to reach it’s first completion point (of many to come, we hope!). The new community health center that was originally used as an ICT repair shop, of which TANF has assisted in the clean-out, the donation of materials is finally ready to use. This is because TANF, over the past two days, (April 2013) has been involved and organised the painting and decoration of the building.
On 19th April, Rev. Laud and volunteer Josie Gallop (UK), along with a student and a teacher (Ben Torsu) from Wisdom Academy, began the first coats of paint inside and outside. This also included painting the metal bars on the windows, the doors and the wooden frames around the windows. They used the paint and the brushes that TANF had provided. Inside, the team chose a cream colour, to give a fresh feel to the rooms. Outside, brown was chosen for two reasons; to hide the dust and to match the nurses’ uniforms. The doors and wooden frames were painted green, to match the buttons on the nurses’ brown dresses. 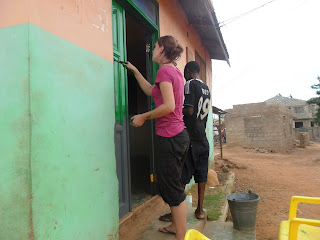 The team of 4 worked for over 3 hours to get the first coat of paint finished all over the building. Then, today, 20th April, this team, along with other helpers, including another volunteer, Jana Freund (Germany) all helped out to layer the second coat of paint to hurry the building towards completion. It was a busy morning trying to get everything finished, but with everyone helping and working as hard as they could, everywhere received its second coat of paint. 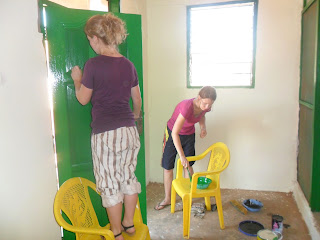 All left to do now is to wait for it to dry to then move the equipment inside. TANF and its helpers did a great job and the nurses were thrilled that finally they are able to start using their new community health center. So, thank you everyone for your support!