Share This Via:
Hello everyone!
TANF has been holding lots of events for the past few weeks and on 14th April 2013, TANF held its first parents’ review meeting. All parents of TANF children were invited to Wisdom Academy where Rev. Laud and two volunteers (Jana Freund, Germany and Josie Gallop, UK) spoke about the importance of education. The talk also gave parents a chance to be involved in reporting to TANF its successes for their child, how its improved their life and any further additions they require from the foundation. 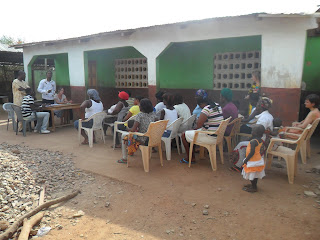 The talk began by reiterating what TANF does and how TANF works; that TANF aims to provide all children with free education and healthcare and to rescue children from child labour. The talk was given in English and translated into Twi, the local language spoken in Teiman. Many parents did not receive an education themselves, so their understanding of English is lacking. This is a factor that TANF has found sometimes hinders children that they work with; when parents have not received a steady education, their ability to help and encourage their children lacks considerably. TANF strongly pushed the idea that parents should not allow this to affect their children; just because they did not receive an education does not mean their child’s education should be obstructed. 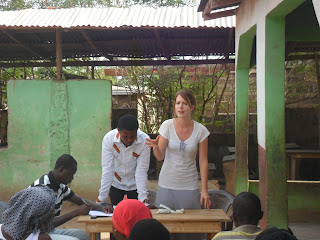 ‘Education is important. Education is a right’. These were two statements that TANF opened the second half of the talk with. TANF then moved on to explaining and highlighting the different importances of education, including; that education gives people critical skills, such as mathematical problem solving, education teaches discipline, education can create sustainable economic growth, education fights disease and education fights against corruption, such as racism and sexism. All of these things highlighted were then taught how these skills can be bought forward into a
person’s later life continually: we are always
learning.

TANF spoke about investing in education like a business, as when you invest in education, it raises income, it improves health, it promotes gender equality and reduces poverty. Parents were told that if you invest time, effort and a small amount of money, in return you will gain more and benefit greatly. As TANF cannot support children beyond JHS (aged up to 17), TANF tries to encourage parents to put aside 15 Ghana Cidis every month to go towards future university education. This 15 Ceedis is likened to phone credit that one would spend and that no one, not TANF, not teachers at school, not the child can touch this until the time is ready.

Parents were then spoken to about their role; that TANF is not the sole supporter of that one child. It is a three-way, shared responsibility between TANF, the parent and the child. The child takes one-third by attending school, doing work and exams, TANF takes one-third by paying the expenses and parents take the final third by encouraging their child and supporting them in their work.
The final message of the talk was to encourage parents to help their children better their future: all children have dreams for their future; let that dream come true for them.
The meeting then moved on to hearing from the parents themselves. They were asked about how their child’s life and their life had changed for the better since TANF supported them, followed by asking them what else TANF could do to assist them further. 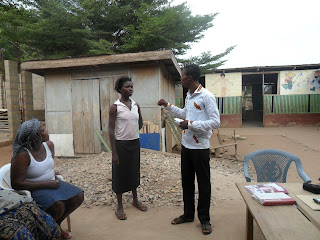 This is the mother of Abdul Manan, who is 3 years old and was recently rescued from the child labour camp by TANF. She spoke to Rev. Laud and the volunteers and explained how Abdul was not attending a pre-school before TANF rescued him and if TANF had not rescued him, he would not have been able to start school due to a lack of fees. Previously, every day, Abdul would assist his mother at the quarry site. His mother mentioned how TANF has provided everything for Abdul, including his uniform, his fees, his feeding fee and all his equipment he needs for school. She expressed her thanks!
The mother of Diana Adukpo, another rescued child, congratulated TANF’s work considerably, telling us how much the whole family had benefitted. Previously, her daughter had been out of school for one year because of a lack of fees. TANF has released this burden of paying these fees, meaning the family can be reassured their daughter is receiving a steady education. 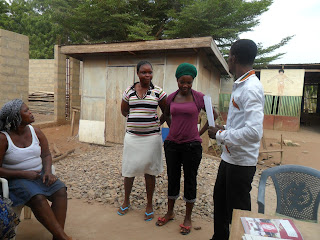 These are the mothers of two rescued TANF children, Chelsea and Daniel. Both mothers work at the quarry site and before TANF came into their lives, both children assisted their mothers in working there. The work at the quarry for both parents was only ever enough to buy food and sometimes this was also scarce, so paying for fees was out of the question. Both mothers expressed their gratitude to TANF.
Their suggestions for help in the future is for books and materials the children can have at home, so parents can assist their children with extra work and homework.
All TANF supporters – the thanks and appreciation from these parents is directed at you! We thank you for all of your help, support and donations. Please, if you are reading this and haven’t donated yet…it is a small fee to allow one more child to attend school and will make a whole family’s life a whole lot easier. Visit our donation site to place your donation!